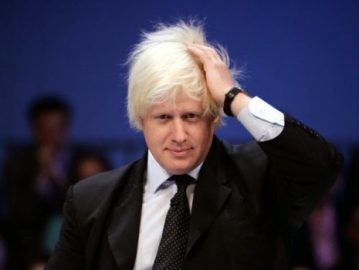 The tiresome wanker is expected to ruffle his hair when challenged

Although Boris Johnson will miss today’s Commons third Heathrow runway vote, hoping to swerve his promise to lie in front of the bulldozers, the UK has told him as the work won’t start yet he can do the right thing when he gets home.

An online petition for him to do so was signed by over 250,000 people within three hours of being launched. “I’ll give him a lift to Heathrow day or night, I’ve even got a groundsheet for him to lie on.” said Carly Jeffrey, a teaching assistant from Harold who started the petition. “Though lying is something he’s rather good at, anytime, anywhere. Of course he’ll have to sit in the back.” she added “Not behind me. On the other side of the car. Out of hands reach.”

Seasoned political watchers confidently expect the tiresome wanker to answer questions about his whereabouts today by ruffling his hair, pretending to look stupid and grinning; tricks that helped him survive exposure as an unrestrained extra-marital shagger, a serial liar, and someone who’d set up another journalist to get a good kicking.

In short, just the sort of chap you’d want to represent your country.