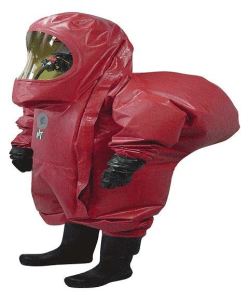 Gareth Southgate has written to FIFA complaining that his squad’s 2018 World Cup strip may hinder them on the counter-attack.

The new kit, designed by the FA and built by chemical warfare clothing company Nuke, may test the team’s mobility on the pitch, he said.

“Defensively, there’s no real problem,” said Southgate, “apart from Joe Hart’s backside constantly triggering the goal-line technology. Come to think of it, he does that anyway.”

But Southgate’s main concern is with the long ball over the top on the counter.

“Striker Harry Kane simply can’t get a clear view of the ball without turning his whole body round,” he explained, “leaving his oxygen tank caught in the offside trap every time.”

Head of English football development Sir Trevor Brooking however said the squad needs to persevere with the new kit.

“I want to see the team come back from Russia full of pride, not chemicals.”