“So, is this how it’s going to be then?” asks Meghan Markle, after her first full-on week with the British media 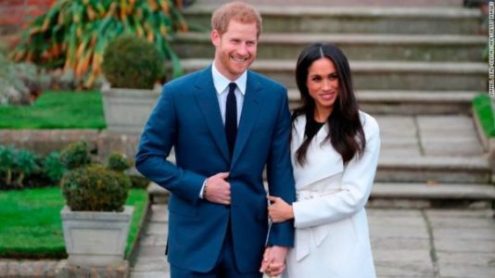 An intelligent, articulate American woman has had her first real taste of the numbing void inhabited by the Daily Mail and its readers.

Some newspapers considered weighty matters this last week, such as economic implications of Brexit for the car industry.

Mail readers however, were invited to assess the merits of a woman they’ll never meet, based on grainy school photos and half-remembered or fully-invented anecdotes of her behaviour when she was six. Worse yet, many did respond, with a variety of ill-informed opinions. Several were only mildly racist but just as surprisingly, none went the full Dacre/Duke of Edinburgh.

Over at the Guardian though, they’re obsessed with Meghan Markle’s mixed race. Many writers struggled to stay dry as they came to terms with ‘the first black princess in the House of Windsor’, and Polly Toynbee suspended her membership of Republic, in the hope of a wedding invitation.

To mark the first historic week of the Royal engagement, the Sun has published a full-colour pull-out, recording all the major highlights, whilst the Mirror has gone with an intercepted text from Meghan, somehow obtained without the knowledge of Piers Morgan, which reads.

“If it’s all the same to you Harry, I think I’ll f*ck off back to Hollywood. Four more years of Donald Trump suddenly doesn’t look so bad. M xx”

Comments Off on “So, is this how it’s going to be then?” asks Meghan Markle, after her first full-on week with the British media