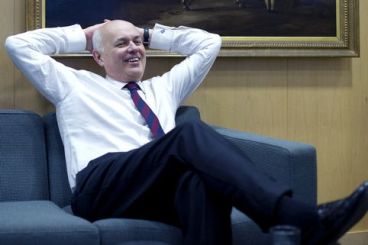 They’ll thank me later. They always do.

Ukippers and other idiots are still keen on giving the UK a damned hard brexit, often waking early, drenched in various bodily fluids, after a night spent fantasising about it.

With the referendum won, right-wingers are managing their otherwise empty internal worlds by dreaming of giving us all a really good brexiting. “The UK may say be saying ‘no’ but I know better,” explained top Vote Leave liar, Iain Duncan Smith. “I know what she, err it, really needs. It’ll thank me later.” he laughed, adding “They always do.”

“Sometimes countries need a firm hand” chuckled Duncan Smith “and Dominic Raab, John Redwood and I are just the sort of men to dish it out.”

“I’m not a gambling man, I already have enough money for three lifetimes, but I’d wager that the UK will be begging us for more hard-right policies, just as soon as its eyes stop watering.”