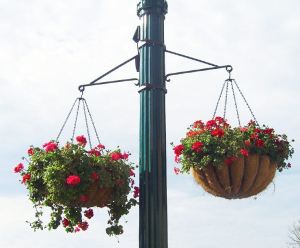 The Labour Party has voted unanimously in favour of more overhead floral growth as a peaceful and environmentally-friendly deterrent against terrorism.

Moving the motion, Shadow Home Secretary Diane Abbott left the delegates in suspense for a moment when she called for a vote to “Bring back hanging” before pausing to take a sip of water then adding “baskets”.

The idea has been welcomed by Harold psychologist Dr Freya Fairchild.

“Studies have shown that in an environment of pretty colours, sweet scent and a scattering of adorable kittens, people are less likely to become radicalised,” she explained. “The bonus with hanging baskets is that they not only deter terrorists, they also improve the lives of pensioners, so it’s definitely a win-win policy.”

But Doris Kettle (86) remains sceptical about the scheme.

“Of course flowers are lovely, but where’s the costing exercise? Mark my words, they’ll be introducing a Floral Enjoyment Tax to pay for it. The Tories did that in the park last spring with a pay-per-view policy. They caught my friend looking at the daffs without the appropriate local authority licence and fined her a whole year’s care allowance, the bastards.”

Next up, was Denis Skinner’s motion to “bring back flogging” (pause for water) “a dead horse”.

Comments Off on Labour vote to ‘bring back hanging baskets’