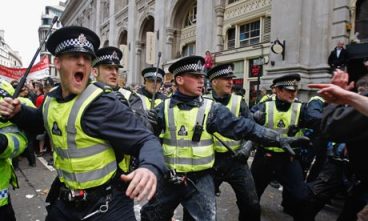 As the government steers Brexit with all the skill of a cow attempting to land a Lockheed Martin F-35 Lighting II on the deck of a storm-tossed aircraft carrier at midnight it has decided to give police and prison officers more money.

“These two events are not connected,” insisted Home Secretary Amber Rudd. “The police are wonderful, we just didn’t notice how wonderful until we thought about the future and realised that it’s going to get a bit rioty. Likewise our fabulous prison officers who perform daily miracles in difficult circumstances. It just slipped our minds to give a rats arse about them until we considered just how many arrests are going to be made in the near future and how many voices we’re going to want to silence.”

Local police officer PC Anita Flegg is delighted by both her pay rise and her upcoming opportunity to “get stuck in” and told us: ” My dad was a copper before me and the miners’ strike paid off his mortgage. I’m looking forward to civil disorder doing the same for me.”