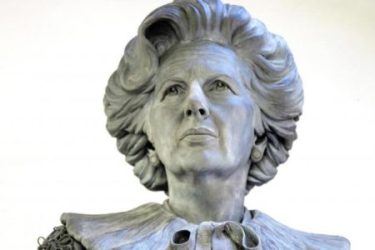 Sculptor Digby Burns is perhaps best known locally for his acting, having appeared in an early episode of Midsomer Murders [uncredited, man walking dog by lake] and of course, his career-defining series of TV ads for Dairylea cheese slices in the late 1990s.

Burns says that his larger than life statue will be hewn from a single giant block of Yorkshire coal. “It will feature a South Wales miner, hammering a 6 foot Sheffield steel crucifix through Maggie’s chest, at exactly the spot where a heart might be”. Because Burns wants to make the installation an interactive one, he has priced the work to allow for a year’s supply of eggs, custard pies and crates of school milk.

A cast iron ‘working model’, a tribute to Mrs Thatcher’s ‘Iron Lady’ reputation, was abandoned at early stage, due to being too malleable.

“I’d also thought of making it out of wood” says Burns, reflectively “but just in time I remembered, the lady was not for turning.”