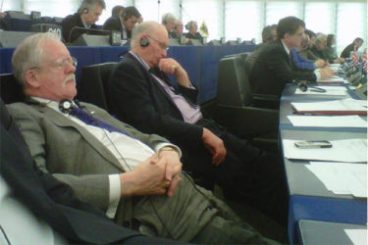 Roger Helmer MEP, working flat out for you

“This is typical EU sloppiness.” claimed Ukip’s Roger Helmer who has resigned as an MEP, ahead of demands he repay £100K spent illicitly employing a Ukip party worker, in breach of the rules.

“Even a banana republic wouldn’t let me misuse that much money” Helmer said, with passion “The public deserves better and happily, with Brexit, such brazen scandals will soon be a thing of the past”adding “Schadenfreude? No, what does that even mean?”

Roger Helmer has described global warming as “myth”, pointing to the ice in his fridge as compelling evidence and suggested some people found same-sex relationships “distasteful if not viscerally repugnant”, although accepted that the “some people” he had in mind were all members of Ukip. Yes, it’s that MEP.

A statement from Ukip said only that Mr Helmer had resigned in order to spend more time with the EU cash, before it has to “go back where it came from”.