“Bollocks to it, you sort it out” PM asks the Doctor to fix everything 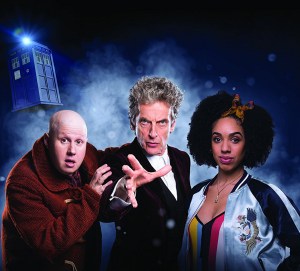 Nardole, the Doctor and Bill: we’ve more faith in these three than we do in Rudd, May and Johnson

With the threat level at Gadsbudlikins! and the NHS on its knees plus Debatable being on all the damn time, Theresa May has ceased to be strong or stable and asked the Doctor to make everything shiny again.

It’s understood that the Prime Minister was just about managing but then that arch right-winger Morrissey said something nasty about her on Facebook causing her to wobble and call UNIT.

So far the Doctor has yet to respond personally however his associate Nardole has released the following statement: “The occupants of the TARDIS at this present time are variously from far away and without visas, gay, disabled, mixed-race, and big fans of foxes. Forgive us if we’re in no hurry to kiss it all better for the Tories. Get back to us when there’s Daleks on Westminster Bridge (again).”

A Number Ten insider has confirmed that they are pursuing other avenues of help with top of the list being Batman as a billionaire who believes he’s above the law and loves harming those weaker than he is is more “their kind of person.”

Comments Off on “Bollocks to it, you sort it out” PM asks the Doctor to fix everything

Tagged as Doctor Who, Evening Harold, theresa may