Farage: “We’d have been bigger arseholes without Carswell.” A puzzled Nation scratches its head 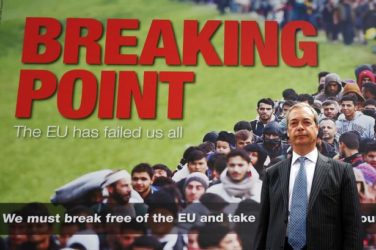 “Bigger arseholes? How would that have worked then?”

Nigel Farage, has set the UK a tough puzzle; “How could UKIP possibly have been bigger arseholes over the past few years?”

In the wake of Farage’s claim that UKIP could have been more anti-immigrant, but for the spoilsport Douglas Carswell, the Nation has expelled a massive “WTF?” “I’m a dab hand at crosswords and killer sudoku and once got two questions right on Brain of Britain,” said Harold geek, Cassie Fine “but this has got me stumped.”

Co-owner of ‘Dungeons & More Dungeons’, Fine is no stranger to the murky darkness lurking in the souls of characters populating a host of imaginary worlds.

However, even this had not prepared her for contemplating how an arsehole like Douglas Carswell might have stopped a huge aresehole like Nigel Farage from turning a bunch of arseholes like UKIP into an even more monstrous collective of arseholes.

“Possibly, some things are so deep that they’re beyond the wit of woman to understand. Unless you’re an arsehole like Farage.”

One Response to Farage: “We’d have been bigger arseholes without Carswell.” A puzzled Nation scratches its head