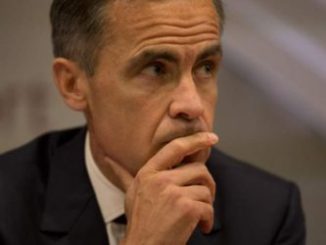 Carney struggles to make himself clear to morons

Mark Carney has warned the UK to curb it’s credit card use, because any Brexit windfall will go to the Treasury, not direct to morons.

Borderline simpleton and pub bore, Alec Fairchild, dismissed Carney’s fears, however. “I’d rather take Boris Johnson’s word over that of a Canadian immigrant.”

“And don’t get me started again about the ‘£350 million for the NHS’ on the side of a bus.” he insisted “Us leavers aren’t stupid. We all knew that wasn’t true and Boris has admitted it. But, if the £350 million isn’t going to the NHS … it must be going somewhere else.” argued Fairchild, as his audience’s brows furrowed in unison. “Yeah? Think about it. It must be coming to us.”

“Don’t forget, Carney was fiercely anti-Brexit.” said Fairchild, tapping the side of his nose “As soon as I heard his Project Fear personal debt warnings, I went on-line and maxed out all my credit cards like a champion. See how he likes that!”