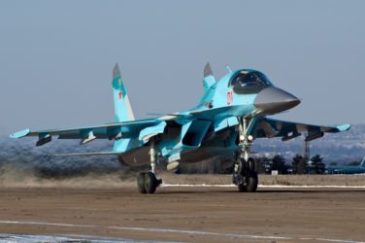 Hospital porters are no match for this puppy

Sergey Lavrov says Russia now has the upper hand in its fight against international aid workers in Aleppo.

“Frankly, Médecins Sans Frontières just didn’t turn up for the last one – it’s as if they know their un-sterilised scalpels are no match for our Su-34 strike aircraft.”

They’re ‘big men’ in their fancy operating theatres but not so high and mighty when 327 Squadron with Hospital-Buster ordnance turns that cosy scene into a theatre of war. Hah, pussies!”

Russia’s fiesty Foreign Minister is not complacent though “Yes, we’ve knocked out the last operating hospital in east Aleppo. Yes a quarter of a million people have no access to emergency care but we can’t just rest on our laurels.”

“Many doctors, nurses and support staff might still be alive. Some at least. At any moment, they could scramble out of dusty, rubble-filled cellars, over the mangled bodies of fellow bleeding-heart liberals, and start wantonly treating the sick and injured. Well not on my watch.”