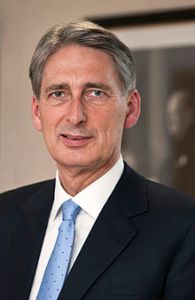 Philip Hammond. It’s okay, we know you’ll have forgotten his name by the end of this sentence.

“It’s nonsense,” said badly reanimated cadaver of the male teacher who scared you the most, Philip Hammond. “At a time of austerity, asking that workers should earn enough to live on is economic suicide. And wages to buy food? Can’t they all eat cake?” the baffled multi-millionaire asked.

Outer shell of nothing, Hammond’s previous ministerial posts are unknown to anyone without internet access.  “George Osborne’s national living wage is quite sufficient” he asserted.”I said said George Osborne, you remember. George? No? Is this thing on? Right, on with screwing the poor and vulnerable. I’m getting the name Margaret, does that mean anything to anyone?”