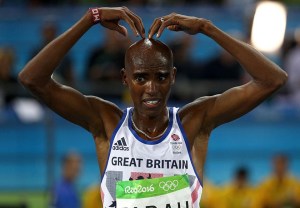 A frustrated Mo Farah says he doesn’t know what more he can do to secure the role of R2D2 in the Star Wars films after once again doing his trademark ‘Mobot’ celebration.

Farah says he truly hates running, but it’s a means to an end to get his dream robot role.

“All the running training is mind-numbingly boring, but I keep telling myself if I win the big races it’s another chance to do the Mobot and impress Hollywood. Plus all the exercise keeps me slim enough to fit inside the R2D2 costume” remarked Farah.

Farah said as well as doing the Mobot, he tries to race next to much taller runners to simulate being with C3PO, and every time he flies to an event he stays in character by pretending the plane is the Millennium Falcon – quite a challenge when flying Ryanair.

But every dream has a downside. Farah realises there will be less pleasant aspects if he gets his new role, and in preparation has already spent several parsecs hidden in a battleship escape pod with the construction plans for an Imperial Death Star hidden up his arse.

“It’s just part of the job,” he admitted ruefully.