Cameron and Osborne resume their ‘inheritor of money’ careers 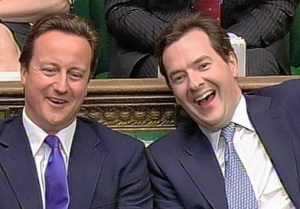 A few days after their ‘funneling money to their mates’ careers ended, David Cameron and George Osborne have resumed their ‘inheritor of money’ careers.

The pair were said to be exhausted after 6 years of coming up with ever more outlandish reasons why the poor had to bear the brunt of austerity, and pleased to now have the more relaxing job of rolling around in a pile of daddy’s money.

Cameron and Osborne said they were initially apprehensive about resuming their earlier careers, but quickly got back up to speed.

“Inheriting money is like getting someone else to ride a bike – it’s a skill you never really lose” explained Cameron. “I know it sounds a bit conceited, but I really think I was born to inherit money.”

Osborne agreed saying he was pleased he had a fallback inheriting money career, because he didn’t want to sit round doing nothing, but it wasn’t an occupation for everybody.

“What people perhaps don’t realise is that a lot of hard work goes into inheriting money. Not hard work by me of course, but those workers in father’s factory often put in backbreaking 10 hour shifts to build up the capital I inherited” Osborne remarked.

Cameron and Osborne said despite launching themselves into their old careers and inheriting money 24/7, it wasn’t all work and no play, and they still found the time to enjoy the simple pleasures in life, like watching a pig gambol in a field and dressing up in a gimp suit while snorting cocaine with a prostitute.