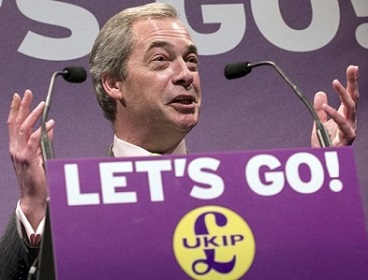 The country has reacted with bitter disappointment this morning to discover on waking that Nigel Farage is for some reason still in existence.

“Leaving Europe will bugger up our country for generations,” explained Evening Harold business editor Piers Waghorn, “But if there was one faint silver lining to this massive turd cloud it was that Farage should logically cease to be.”

“What’s he thinking? Why does he still exist? By now he should be a bad memory, not a living breathing arsepipe.”

The millions who voted to Leave the EU have also all expressed disappointment, explaining that the only reason they did it was to get rid of Farage once and for all.

“We realise the country will sink into recession and England is now the most despised nation on Earth,” admitted a spokesperson for the 52%.

“But it seemed worth it on the assumption that UKIP would disappear. We feel cheated.”

However, speaking to journalists, Farage insisted that his work was far from complete.

“On one level, I’ve ruined the country, it’s true. But there’s so much more to do. Have you got a swimming pool? Well do you go to one? Good, I’m going to piss in it. Then I’ll let down your tyres. Then I’m off to Tesco’s to touch all the fruit.”

“An arsehole’s work is never done!”

Comments Off on Farage still here