Bible knowledge “applies to refugees, not to me” says Home Secretary 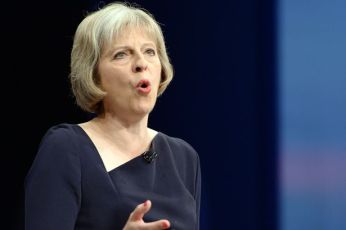 “I’ll have what she’s having.” May watches a deportation

“I’ve been going to church for years” explained Mrs May “so I’ve no need to prove I’m a christian.

An Iranian though might be tempted to pretend to be so by our subsistence benefits, risking nothing more than public execution of his or her whole family if the Iranian religious police learn about it.”

May says a simple test will help immigration authorities sort the sheep from the goats and gave examples of the kind of questions that might be included.

1:”For I was hungry and you gave me something to eat …, I was a stranger and you invited me in, I needed clothes and you clothed me… ’ Explain why this doesn’t refer to middle-eastern refugees.

Mrs May dismissed claims that the system is too rigid and excludes people unfamiliar with an exam setting. “Not at all. We offer an alternative route; reciting the whole of the New Testament from memory. In the original Greek.”

Comments Off on Bible knowledge “applies to refugees, not to me” says Home Secretary