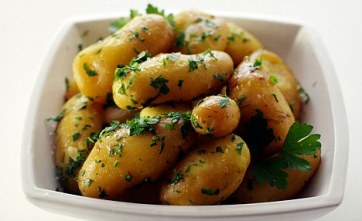 Pond scum in shit jumpers, Britain First, are grunting for potatoes to be deported following the publication of a study in the BMJ which has identified frequently eating potatoes with hypertension.

“I didn’t read no study,” said Paul Golding, leader of Britain First. “But I heard someone saying something in the pub about potatoes being bad for you or something and so it’s time we took our country back from these immigrant brown-skinned evil-doers what are undermining our way of life by forcing innocent Britons to get all fat and ill and that.”

“They should all be dumped back in their own country and left to rot. I don’t know which country that is but I bet it’s a muslamic one.”

As a cautionary measure on its website Britain First is urging its members to only consume “decent, traditional and patriotic British food and drink like pizza and chicken tikka massala.”

We reached out to the potato community for a comment and when it had stopped laughing a spokestuber remarked that Britain First really were “a bunch of vegetables”.