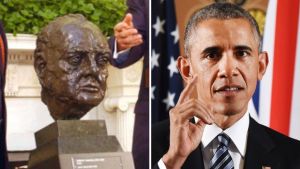 Is this some kind of bust?

Obama’s removal of the Churchill bust from the Oval Office confirmed, as Boris Johnson pointed out in his article for The Sun newspaper, that he carries the anti-Brit gene inherited from his Kenyan side, but a new report suggests that this is just the latest in a long line of US Presidents unable to think or act rationally due to dodgy DNA.

The damning report slammed several post-war US presidents, and if speculations are to be believed, what they could have done to the Churchill statue behind closed doors makes what Obama did look pale by comparison.

Dwight Eisenhower – or to give his surname its proper spelling ‘Eisenhauer’ – was of course part German, a country with whom Britain has seldom been allies. Therefore, the report claims, he almost definitely carried the anti-UK mutation, even if he was not aware of it. Despite their good relationship in real life, some suggest that in private, Eisenhower could have made fun of our nation’s greatest leader by making the statue eat sauerkraut or sausages with mustard on.

Fast forward to the sixties and we find part-Irish John F. Kennedy in the Whitehouse. The report points out that the Irish ancestral hatred of Britain is second-to-none, and it is thought that while praising Churchill in public, it is most likely Kennedy allowed his many mistresses to give him oral sex in full view of Britain’s war-time PM’s disapproving statue eyes.

Yet another Brit-hating part-Irish president, Ronnie Reagan, would have probably just thrown things at the statue, or drawn moustaches on it, being unable to get a full erection at his age.

Even George Bush Sr, a 7th generation descendent of Captain Timothy Bush who actually fought AGAINST the British in the war of independence, would have been unable to resist his genetically encoded antipathy towards Great Britain, although he probably kept his acts low-key, like whispering taunts in Churchill’s bronze ears about the Yorktown surrender.

While his son, also a president, is known to have made a mockery of Churchill just by having his photograph taken with it. 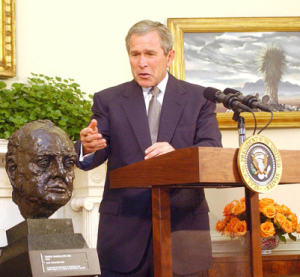 The report’s author, Dr Ian Yates, a pro-Brexit expert on this kind of thing, concludes that “Whenever a US President says or does something you don’t like, you can usually trace it back to one of their ancestors having a grudge against us, and Obama’s petulant ‘back of the queue’ warning therefore cannot be taken seriously in that context. It’s in his blood.
“On the other hand, we are confident that we can swiftly win favourable trade agreements with our good friends across the pond once we are disconnected from the EU, and therefore of much less use to them.”