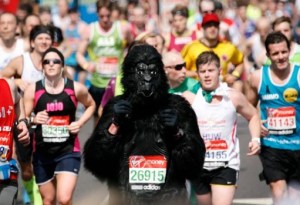 Violent, but does a lot of great work for charity

London Marathon organisers were left red-faced today after an escaped gorilla, whom everyone assumed was a runner in fancy dress, went berserk and killed 15 people.

The gorilla, an impressive male silverback named Kumbuka, was the pride of London Zoo’s “Gorilla Kingdom” until an inexperienced keeper forgot to close a security gate.

Kumbuka somehow made his way to Greenwich Park, where thousands of contestants were preparing for the start of the marathon, and inevitable disaster ensued.

“It seems that this magnificent gorilla may have got enraged after stumbling into a huge crowd,” explained Evening Harold sports correspondent Piers Waghorn.

“That, and the fact that someone pinned a great paper number onto his chest.”

In the turmoil that followed, race sponsor Richard Branson had his head ripped clean from his body, but this was soon followed by genuine tragedy after several real people were killed.

Celebrity father David Furnish was among those who narrowly escaped, in a three-man pantomime horse costume, the other occupants of which we are sadly unable to report on.

To make matters worse, police marksmen proceeded to shoot the wrong gorilla with a tranquilliser gun, leading to the near-certain closure of a Dunstable day centre due to lost sponsorship money.

Looking on the bright side, Kumbuka ended up finishing the marathon in a highly respectable time of 3:18:27, shortly after Dame Kelly Holmes, but just seconds in front of the pursuing David Attenborough and his tiring film crew.