Local bank ‘was just a front for a launderette’ 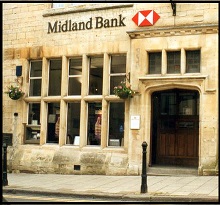 Bank, then a launderette, now a poundshop.

From the outside, it looked like any other High Street Bank. But behind the heavy wooden doors, a laundering operation was providing services for working people with no washing machines of their own.

Documents obtained by the Evening Harold from the local Planning Committee reveal conclusively that a ‘change of use’ application was approved in 1959, subject to the building retaining its original facade.

“I’m not surprised at all,” said Doris Kettle who remembers well the massive ‘just one more sixpence’ launderette drying machine swindle of the 1960s.

Local tramp John Horse also has fond memories of the establishment. “Open all night, you see. I wasn’t myself into any sort of personal hygiene thing, but I did used to pop in for a warm up. I still remember spreading myself out across two or three plastic chairs and drifting off in the humid atmosphere, mesmerised by the gentle tumbling of Doris Kettle’s bloomers.”

By the seventies, the popularity of the launderette as a night-time social hub for teenagers reached a peak, providing them with a safe haven for a shared cigarette and a cuddle. But all good things come to an end and in 1979 Thatcher launched her notorious crackdown on launderette operators, as she sought to persuade housewives to adopt her ‘iron with a fist’ rule. Tax Inspectors came a-knocking, but the owner of Harold’s Midland Bank Launderette had already fled the country.

“He still keeps in touch,” said Doris, fishing in her handbag for a postcard. “He says he’s doing alright and he’s running a new laundry service from his yacht in the Caribbean. Lovely weather. Kiss kiss.”

Photo © Copyright Roy Hughes and licensed for reuse under this Creative Commons Licence.