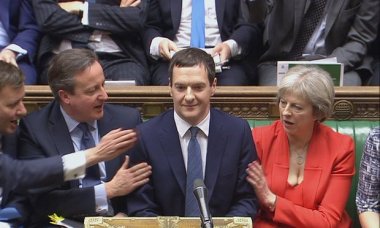 MPs yesterday beheld a miracle as George Osborne refused to apologise for his budget balls-up with such arrogance he made Iain Duncan Smith seem like Jesus in his compassion and morality.

“No apology needed,” Osborne barked. “My budget looks after those who need protecting most i.e wealthy Tory pensioners. So what if it was an attack on the disabled. You say disabled, I say not pulling your socks up, and in some cases going so far as to claim you can’t put your socks on, and getting out to work.”

Strangely the Chancellor went on to say that he had no need to find £4.4bn of savings to replace the now shelved Personal Independence Payments cuts as he was on course to meet the Tory manifesto pledge of £12bn in welfare cuts without them. When asked why he had then been so insistent on making this cut he sniffed and replied that it was for “shits and giggles”.

“Well, except for coke addiction. Obviously”