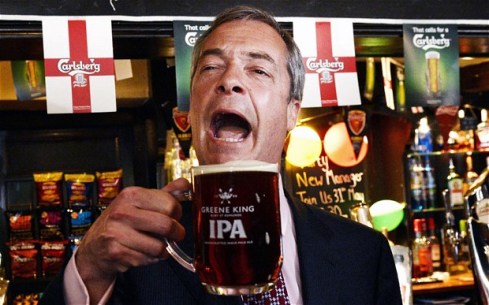 “UKIP claims their members are one in purpose” says Newsnight’s Emily Maitlis “but it beggars belief that they all think the same on a matter as important as the EU referendum”.

A BBC Newsnight investigation, to be screened on Wednesday, reveals a likely conspiracy amongst leading members of UKIP. While other parties allow their parliamentary party free rein to support the “In” and “Out” campaigns according to their conscience, Maitlis notes that “UKIPs MP remains suspiciously unanimous in his support for leaving the EU”.

“It’s easy to see why high-ranking party leaders might toe the line and maintain favour with Nigel Farage but why,” she asks “are rank-and-file UKIP members apparently so afraid to speak out against party policy?

Newsnight also questions whether the BBC itself might be complicit in a wider media cover-up with sources close to the party hinting that UKIP opinion may be split.

“Our enquiry is continuing but we’ve yet to find a single occasion on which a pro EU UKIP supporter has been invited onto a BBC programme, to put the other side of the argument”.

Comments Off on Pro-EU UKIPpers “gagged” in run-up to referendum, say sources