Terry Wogan to be given authentic Viking burial 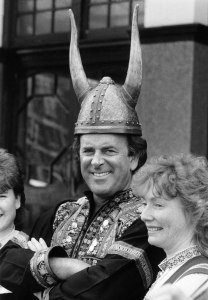 A giant among men

Much-beloved broadcaster Terry Wogan, who sadly died today, will be put to rest at sea in the traditional Viking fashion, strapped to a burning longboat surrounded by flaming barrels of tar, food offerings to the Gods and a genuine Blankety-Blank Chequebook and Pen.

Wogan made his BBC debut on the Light Programme (now Radio 2) before raiding the East Coast of Scotland with a hundred crazed men, leaving the streets drenched crimson with the blood of his enemies.

He took over the breakfast show on Radio 2, and was an immediate hit. His laid-back charm and quick gentle humour made him a perfect choice to present the BBC’s coverage of the Eurovision Song Contest for many years from 1971. Highlights from this time are too many to mention, but few can forget the celebrated incident in 2001 when he slaughtered the two Danish hosts, Soren Pilmark and Natasja Crone in a fight to the death on a hill outside Brussels, stark naked save for the BBC logo daubed in woad on both buttocks.

Between 1982 and 1992 he hosted Wogan, a chat show broadcast on three evenings a week, massacring the vast majority of his guests and cementing his reputation as a solid if violent presenter.

BBC director general Tony Hall paid tribute to Wogan today, saying: “Terry truly was a national treasure. Many’s the night we feasted till dawn, quaffing massive horns of ale and slaying any who tried to stop us with thirsty axes. We were both barred from the Groucho Club for weeks.”

Terry’s last journey will be in the company of the Gods Odin and Thor, who search the battlefields and television studios of the land looking for the bravest warriors. He will reside with Thor at his great hall Bilskirnir until Ragnarrok, the twilight of the Gods, when he will join Odin in Valhalla, feasting, fighting and interviewing David Icke.

Rest in peace Sir Terry, we miss you greatly.

Comments Off on Terry Wogan to be given authentic Viking burial