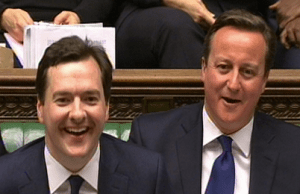 What a bunch of arseholes!

The entire population of the UK has been severely criticised after dismissing David Cameron’s government as “a bunch of arseholes”.

The remark came during Prime Minister’s Questions yesterday, when Cameron displayed an absolute lack of humanity towards refugees fleeing from a war he helped create.

Acting as one, millions of people across the country looked at each other and said: “That government, what a bunch of arseholes”, while Cameron laughed at the plight of the desperate starving thousands.

A spokesman for the government said the public’s remark was “completely unjustified and unfair,” adding that “Although there may be a large number of arseholes in the government, you cannot just lump them together and say everyone is.”

“We do not deny that David Cameron is an arsehole, but many of his colleagues are very nice. OK, Duncan Smith is an arsehole, and Osborne. And May, and Gove, and Hunt, and actually hang on, they really are all just a bunch of arseholes, aren’t they? Every single one of them!”

The general public was not expected to apologise any time soon.