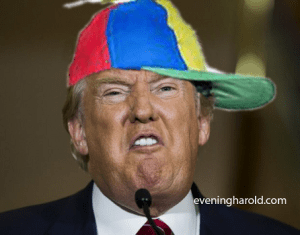 Following his enormous temper tantrum after not getting his way in the planned Fox News debate, presidential hopeful Donald Trump has been revealed to be a snotty six-year-old boy with an unfortunate genetic disorder which gives him the appearance of a 70-year-old orange scrotum.

Trump, although noticeably eccentric, had always managed to disguise the fact that he was only a child via a mix of clever tailoring and fascist ranting, until the latest incident when he learned that the notoriously left-wing Fox News would not agree to let him sack the presenter he doesn’t like.

Little Donald was reportedly found abandoned by his despairing parents in the middle of a shopping mall, rolling around screaming and beating his fists on the floor repeatedly. Passers-by reported hearing him shouting: “NO NO NO I DON’T WANT HER TAKE HER AWAY TAKE HER AWAY MUMMY!” over and over.

He was eventually calmed with a large bowl of ice-cream and a copy of Mein Kampf. Following this he was taken on a rollercoaster, given a new teddy bear and allowed to tell a Mexican family that they were rapists.

“Donald had a long day, and was over-tired,” explained a spokesman. “He’ll be as right as rain tomorrow after a good sleep. But we daren’t ask him to go on TV and do another debate, not until he’s at least in long trousers.”

Scientists explained that the condition known as Trumpism affects only a tiny minority of children, but those who develop it are subject to terrible delusions, often thinking they are successful businessmen who people might want to listen to.

World leaders were reported to be nodding sympathetically, saying they quite understood, and they had one just like that at home too.