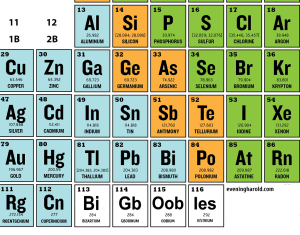 The childish elements among us

The world of science was plunged into embarrassment today after sharp-eyed schoolchildren spotted that the symbols for the newly-discovered chemical elements, when seen on the Periodic Table, spell out the words: “BIG BOOBIES”.

The chance of these elements just happening to be named like this – Bi, Gb, Oob and Ies – seems so remote that red-faced heads of research at the world’s leading laboratories admit that it might not be entirely an accident.

Although the new elements were discovered and named by separate teams in different countries, there is a theory that the various scientists involved might just have got together and chosen names that spelled out BIG BOOBIES deliberately.

“Scientists can be very childish at times, especially under the pressure of the media spotlight, and it is possible that there has been a degree of collusion in the naming of the newly-discovered elements,” admitted Otto Planck at the University of Bremen.

“The new elements, Bizartium, Gborinum, Oobium and Iestrium, might conceivably have been named deliberately so their symbols would spell out a naughty word, incredible though that may seem.”

“It was only when we put them together in the new Periodic Table that we realised “BIG BOOBIES” were staring us in the face.”

Professor Planck had no time for further comment, having to leave to deliver a lecture on an even newer element, which if his calculations are correct could be the heaviest, dullest and most readily available substance in the universe, and which he has tentatively named “Yourmomium”.