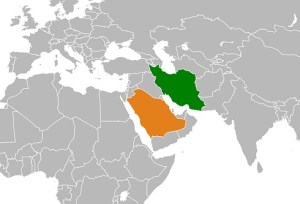 The move is the latest, and most serious, in the current diplomatic row between the two nations and follows Saudi Arabia cutting diplomatic ties with Iran after protesters ransacked the Saudi embassy in Tehran, after Saudi Arabia executed a senior Shia Muslim cleric.

“We are not just talking about unfollowing, or even unfriending here, but outright blocking.” explained Gemma Black, Professor of Middle East politics at the University of Scunthorpe.

“Even if they repair their diplomatic relations there is no going back from here. Saudi Arabia will always know that they were blocked, and in order for the two to become friends again one of them is going to have to send a friend request. Would you want to be the one that came crawling back?”

The USA are said to be monitoring the situation closely and have not ruled out direct intervention if the hostilities escalate to full-blown passive aggressive comments on Twitter.