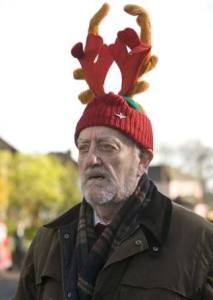 The Cribbins, seen in its natural environment

The RSPCB’s endangered species watch team reported today that ‘Voice of the Wombles’ Bernard Cribbins is now likely to be the only celebrity called ‘Bernard’ still surviving in the wild in the UK.

“Bernard numbers have been dropping steadily for many years, but until today’s count we had no idea just how rare the famous Bernard has become on these shores,” announced an RSPCB spokesman this morning.

“Conditions have been getting more and more harsh for the native Bernard, and one by one they’ve died out – Shaw, Bresslaw, even Manning – we don’t believe there remains a single breeding pair of Bernards in existence.”

“Some Bernards have attempted to mutate in order to survive,” he explained. “Clifton chose ‘Bernie’, Field Marshal Montgomery went for the further removed ‘Monty’, but this wasn’t enought to save them from the the ravages of time and comedy fashion. Actually, Bernie Clifton may still be alive, I can’t be arsed to Google him.”

Until the last few years, hopes were high that Bernard Cribbins, the most formidable specimen, could be persuaded to mate with another of the few remaining Bernards, in order to preserve the line. But despite putting Cribbins and Manning in a seedy hotel room together with soft lighting and plenty of straw, they failed to form an attachment.

“Even internationally, there are so few left, we’re really beginning to lose hope,” sighed the RSPCA spokesman. “If we don’t hurry up, it’ll be us digging a hole for him, frankly. Now, Madoff’s done time, and Ecclestone’s completely out of the question. Perhaps the American artist Bernard Fuchs, I don’t know…”