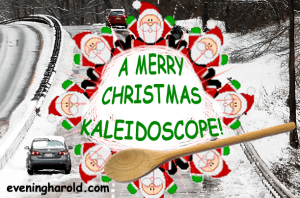 In a bid to give an exciting modern flavour to the event, a musical set was designed with barely any recognisable content at all.

A first glance at the programme (kindly printed by the local branch of Dyno-rod) gave no hint of the horrors to come.

Parents settling down to enjoy “The Twelve Days of Christmas” were surprised to find the old favourite clumsily converted into an unconvincing rap, as it turned out, the first of many that evening. The humorous adaptation of the original lyric, making the birds and characters do unwelcome things, is not an entirely new joke, and was in any case diminished by the children assigned days three to seven refusing to turn up.

“Mary’s Boychild” seemed to promise a more modern but still familiar song, until it became apparent that little Ben Jeffery (7) would be interpreting the piece on spoons. It would have been fairer to both performer and audience to restart the item after one spoon was dropped in the first verse, but this was not to be.

The mass rendition of “Ho Ho Ho – Oi Oi Oi” (a modern song), at least went without a hitch, although some parents were showing the first signs of restlessness by this point.

Fourteen more rap versions of once-loved carols later, devoid of any backing music apart from a brief visit from Head Teacher Clive Morris’s vuvuzela, and it seemed the mood in the audience could turn ugly.

Fortunately, the final song was not only an old favourite, but was also actually backed by a piano, played by a musician, thus winning the crowd back in a joyous burst of communal singing fit to raise the roof.

The fact that the final song chosen happened to be the heavy metal classic “Love Me Like a Reptile” by Motorhead, seemed hardly to matter.