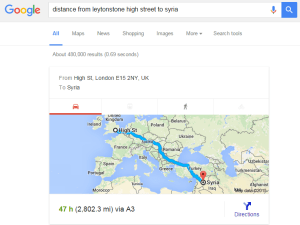 Too close for comfort

Police were called to reports of people being attacked at Leytonstone around 19:00 on Saturday. The knifeman reportedly shouted “this is for Syria”. The police have not yet been able to work out what might have motivated the violence.

In a statement to the press, the Prime Minister explained: “This is exactly why we need to bomb Syria more often. What hope is there of stopping these terrible incidents at home unless we flatten a country far, far away?”

“By killing innocent civilians in our futile show of strength, we will doubtless cause these extremists in Britain to give up their fight.”

“Thank god for the bombs,” said one relieved East Londoner today. “I’d been worried that people around here with families in Syria might consider dead relatives something to get upset about, but a few flattened hospitals should reassure them.”

If by any chance the whole Syria thing doesn’t do the trick, government insiders have hinted that an actual bombing of Leytonstone may be on the cards.

“Leytonstone is very similar to Syria in many ways,” explained a Ministry of Defence spokesperson. “The Middle East End is a strange melting pot of cultures and peoples – not as far away and exotic as Essex, but very much a different land to closer, more familiar places like Hoxton. We say bomb the bastards.”

Comments Off on Syria bombing stepped up to protect Leytonstone