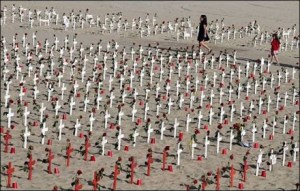 Not this time, says Dave!

The government has explained that the decision to flatten Syria will not cause any of the disastrous problems usually associated with this sort of thing.

Anti-war campaigners, innocent Syrian people and other terrorist sympathisers had pleaded desperately that the inevitiable outcome of bombing would be a hellish nightmare on Earth, but these concerns have now been addressed directly by Prime Minister David Cameron.

In a statement this morning, the PM explained what was different about this war:

“Let me start by saying that this time there will be no innocent lives lost,” he insisted. “No dead children, no slaughtered babies, no families ripped apart by western explosives.”

“Because of this, there will absolutely NOT be a whole generation of Syrians growing up to hate the West and everything it stands for, the burning injustice inside each one all too easily fanned into the bitter rage of extremism. That simply isn’t going to happen.”

“Similiarly, even though we have no plan whatsoever for managing the country after future cessation of hostilities, there is no chance that the region will descend into anarchy, with uncontrollable militias running wild armed with our own weapons.”

“This will mean no depressingly predictable future waves of avoidable deaths, no massive increase in militant extremism and certainly not a thousand times the danger to our own countries.”

“Finally, let me point out that because we are bombing a small, mobile enemy whose whereabouts are basically unknown, there is no likelihood whatsoever that this whole violent exercise is a pointless bloody waste of time and money. No sir.”

When it was pointed out that everything he was saying appeared to be absolute bollocks, Cameron was quick to reassure the public, saying:

“Do you know something? I really, really just don’t fucking care.”

Comments Off on WAR – this time it’s different, explains Cameron