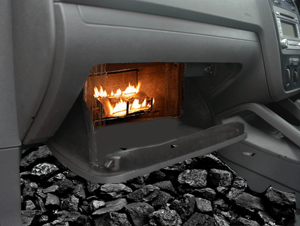 The device could cause asthma, and feelings of Christmas.

The environmental Protection Agency has discovered that VW deliberately concealed that their cars have fireplaces capable burning coal and wood.

A technician made the discovery while trying to put the clock back an hour, and in desperation, opened the glovebox to look for the handbook.

“It looked as though someone had plastered over it”, said the agency’s Gordon Evans. “Perhaps in an attempt to make it seem more modern.”

“but after prodding it with a spoon, it fell away to reveal a period cast iron fireplace. And when we looked on the roof, there was a chimney belting out some muck.”

Volkswagen appear to have exploited a loophole, by not lighting the fire during the official testing cycle.

“But then when the owner is on the road, the car shovels in a couple of bags of coal”, revealed Evans. “It artificially makes the vehicle seem cosy, despite the hard seats and unrelentingly black plastic.”

The company has set aside a further 30 billion euros to correct the problem. “Owners will hear from their dealers shortly, to discuss how we’ll fix this”, said CEO Matthias Mueller.

“They’ll fit a tapestry of some ducks over it, or perhaps install a vase of dried flowers.”

Comments Off on EPA discover Volkswagens fitted with ‘fireplaces and chimneys’.