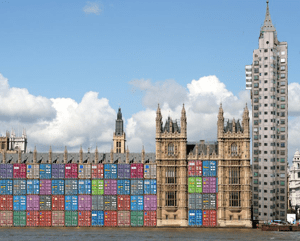 The proud new building should stand for at least another 10 years and 1 month.

David Cameron has saved £7bn on the cost of restoring the Houses of Parliament, by granting the contract to China.

For the mere informality of signing over the freehold, politicians will have somewhere to sit for the next 99 years.

“This is excellent news for the UK tax payer”, said Cameron. “They’re even throwing in a big ‘tribute’ iWatch to replace Big Ben.”

Chinese contractors will start the restoration immediately, with the promise to pay workers a living wage.

“That’s a proud sing in the morning and a laminated picture of a panda where we come from”, said General Secretary Xi Jinping. “Plus somewhere to keep their chickens in London in just under a hundred years’ time.”

Critics have complained that Cameron is selling England by the pound, but he insisted that the deal represented the liquidation of UK assets, in kilos.

“Besides, the chances are we won’t need the old place in a century”, stated the PM. “It’ll be uninhabitable, once all those ‘premium’ Chinese nuclear power stations have gone pop.”