Lashes welcomed for man who ordered red wine in a pub 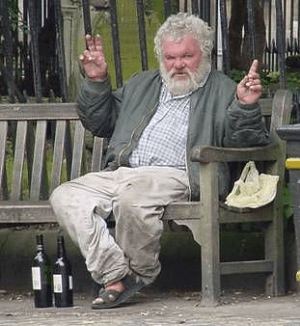 A man who attempted to acquire a glass of red wine in the Squirrel Lickers Arms has been barred for a year, and given a verbal lashing by the landlord.

Mick Clarkson knew the rules when he entered the snug, but felt emboldened after reading an article on ‘creeping gentrification’.

“I’m on some tablets at the moment and the doctor said I mustn’t drink with them”, explained Clarkson. “But wine’s not really drinking, is it? It’s more or less runny jam.”

“So I put on my mum’s hair net and borrowed her pogo stick. I thought Eddie would appreciate being invaded by a hipster.”

Landlord Eddie is unrepentant. “He was culturally insensitive, and his eye will heal up eventually. We sell beer, not something foreign that’s ‘best served with strong meat or red cheese’.

“There’s a ‘hint of lemon’ in the bitter, because I clean the pipes with Toilet Duck. Perhaps that would appeal to Clarkson’s suddenly ‘sophisticated palate’?”

Cllr Ron Ronsson condemned the ruling, and asked for the sentence to be commuted to three months in the smoking shelter.

“I think it would be best all-round”, said Ronsson. “I’d appreciate the company. We could drink some sherry I smuggled in, and smoke a pipe in an elaborate manner. And if anyone joins us, we can loudly pretend to like opera.”

Filed under Around Harold, Crime, Culture