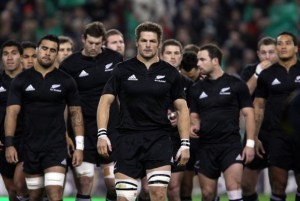 “What were the words again?”

An error in the promotional materials means the All Blacks will have to perform a haiku before each of their remaining matches in the Rugby World Cup.

Cup organisers apologised for the mix-up, but said consumer protection rules meant their hands were tied – if the advertisements promised an All Blacks pre-game haiku, a pre-game haiku needed to be delivered.

New Zealand coach Steve Hansen said he and his players were initially worried about the prospect of coming up with 17 syllables of poetry, but were relieved when they we found out a syllable was not necessarily even a whole word.

“Even better, apparently with a haiku we don’t even have to worry about making it rhyme” said coach Hansen. “To think we wasted all that time learning a Maori war dance when we could be just going on about the ‘grass expectantly poised’.”

Opposition teams were nervous about the prospect of facing an All Blacks haiku.

“Poems black as night. Give us the heebee jeebies. Relieved soon knocked out” said Lancaster.