Five amazing facts about the Queen 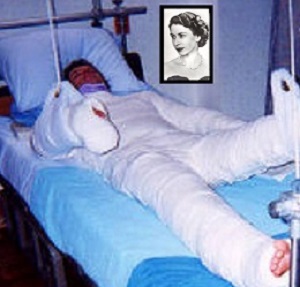 As the Queen finally passes Bobby Charlton’s long standing record, the Evening Harold is able to reveal five astounding facts about Her Majesty, all which are totally true.

Fact One: As befits a lady who is in her 90th year, Her Majesty has a terrible memory and is easily confused. Since watching The King’s Speech she has become convinced that her father was the spitting image of Colin Firth and that contemporary photos of the late King showing him looking like a cod were doctored to reflect the mood of the time. Her Royal Highness is unable to understand how her mother was able to star in the Harry Potter films.

Fact Two: The Queen’s sense of fun and love of slapstick is well known in the Royal household. In 1957, footman Horace Ruffage slipped on a banana skin deliberately left by HRH by the breakfast table. It wasn’t until the Queen had stopped laughing some ten minutes later that it was realised that the faithful old retainer had broken his back in three places. The whole event was hushed up and Mr Ruffage was given a plush grace and favour apartment in Hampton Court where he died in both luxury and agony seven months later.

Fact Three: Contrary to popular myth, the Queen and Princess Diana got on like a castle on fire, and spent many cosy chats over a bottle of gin taking the piss out of Prince Edward. The Queen had promised Diana that she would award Simon Le Bon a knighthood as a fortieth birthday present, but sadly fate intervened. Her Majesty commented recently that only Cilla Black had been loved by the British public more than Diana.

Fact Four: The real reason Prince Philip has to walk a step behind the Queen on all occasions is due to his over exuberant love of pickled onions. For this reason, the Royal couple have always slept in separate bedrooms and on occasions, separate palaces.

Fact Five: Contrary to public perception, the Queen doesn’t so much love horses as horsemeat. Her own horsemeat farm is subsidised by the race winnings of less tasty horses – and there’s always the potential savings from a course vet putting down a faller. The most popular race of the winter racing schedule is the Queen Elizabeth II steaks.

Comments Off on Five amazing facts about the Queen