Game of Thrones exclusive! Is Ned Stark back? 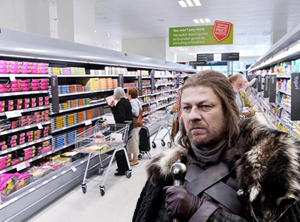 Game of Thrones fans have once again had their hopes raised that Ned Stark might return, and that the script writers have found a way to put his head back on.

With filming of Season Six already under way, a sharp-eyed member of the public spotted Sean Bean, at his pre-execution height.

“I’m sure it was him”, said Simon Tullett, “He was in the hummus aisle and there was this blonde boy acting up. Everyone in there was hoping he’d be poisoned or something, and that’s when Sean walked past and tutted.”

Tullett believes that Mr Bean was still in character, and genuinely thought he was confronting Joffrey Baratheon. “He had some breadsticks, which are a bit like swords”, he explained. “Although he did stop short of stabbing the sadistic boy-king in his annoying face.”

According to the eye witness, Sean Bean’s Ned Stark Head still had its trademark Yorkshire accent, a further clue that he would rise from the dead and bring peace to Westeros.

“He didn’t have a horse outside”, admitted. Tullett. “But he was wearing a ring. I guess that proves that Boromir’s still alive, too.”

Comments Off on Game of Thrones exclusive! Is Ned Stark back?