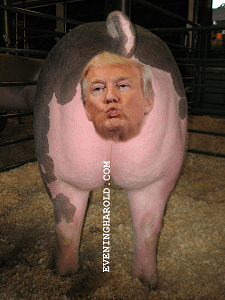 Following the mysterious appearance of Donald Trump’s image in a tub of butter, Republican campaigners were celebrating today after the face of the Presidential hopeful was miraculously seen to appear in the anus of “Ronald”, a Gloucestershire Old Spot from a farm near Stroud,

“This is a sign,” enthused one Trump supporter. “To gaze deeply into a pig’s backside and see the face of Donald – that doesn’t just happen. It means something.”

Following the good news, there was an immediate spate of copycat sightings, as pig owners the world over realised that their pigs’ anuses also bore a striking resemblance to the great man.

A spokesperson for Fox News pointed out that Mr Trump was just as likely to have taken up burrowing through live pigs to have his head emerging from porcine anuses, “Because frankly, that’s no weirder than the shit he does already.”

Meanwhile, an editorial in The New York Times pointed out that the law of ‘Occam’s Razor’ could well apply in this case – the principle which states that the simplest explanation for a phenomenon is most likely to be true.

“Is it possible that the appearance of all these animals has suddenly changed?” asked the newspaper, “Or is it more likely that Donald Trump does actually just look a lot like a pig’s anus?”