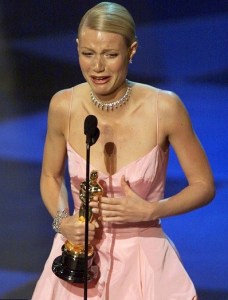 16 years, 5 months, and three days after being presented a best actress Oscar for ‘Shakespeare in Love’, Gwyneth Paltrow finally finished her acceptance speech.

The emotional speech started at the Dorothy Chandler Pavilion on 21 March 1999 as Paltrow tearfully thanked a number of her fellow actresses, movie industry figures, and family members both living and dead.

As Gwyneth was led off the stage, she mumbled, “and my fans, I’d like to thank my fans” as she proceeded to thank all her fans individually by name, before moving onto individually thanking her fan’s friends and family.

The all-consuming nature of Paltrow’s acceptance speech meant she had little time for anything else, leading to an indiscriminate choice of husband, and the naming of her first child after a fruit.

Further movie roles became problematic, as directors struggled to weave Paltrow’s acceptance speech into their scripts, before they finally gave up and just cast her in ‘Iron Man’ and ‘the Avengers’ where no one listens to the dialogue anyway.

After over 16 years of thank yous, and enough tears to break the California drought, Gwyneth finished her speech on a deeply personal note saying, “and in conclusion, no f*cking thanks whatsoever to that uncoupling bastard Chris Martin”.