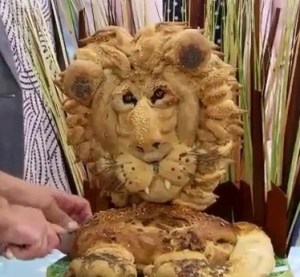 Hit BBC show the Great British Bake Off has become the latest victim of weapon-toting dentist Walter Palmer. The blood lustin’ American burst onto the set and shot the amazing lion bread created by contestant Paul Jagger several times with a bow and arrow.

“I had to,” Palmer said. “I’m a hunter and that there bread lion was too beautiful to exist. I wanted him dead. That’s how you show the ultimate respect for bread, and for nature. You shoot it and put it in your special trophy room so no one can see it but you.”

However Palmer was unable to escape with his trophy as despite being armed to the teeth he was brought down in a spectacular flying tackle by an incandescent Mary Berry who was eventually dragged off him still screaming “I remember the ****ing Blitz! You don’t scare me, you spoiled maladjusted bastard!”

As Palmer now languishes in a police cell it has emerged that Andy Burnham is desperately trying to secure his release and also purchase a lion costume in ‘Corbyn size’.