Cilla’s teeth to be made into Liverpool Stonehenge replica. 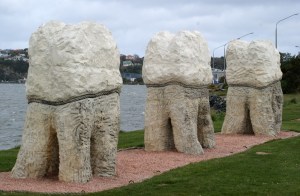 In a lasting memorial to the late Cilla Black, the mayor of Liverpool, Joe Anderson has announced that her monumental gnashers are to be made into a full sized replica of Stonehenge.

Her family donated the dental legacy to their home city after it was revealed that the cost of burying her with them would exceed the value of her entire estate.

Instead, thousands of volunteers will be set the task of hauling the immense incisors all the way from Spain to Liverpool using nothing more than hempen rope and wooden rollers greased with a special Colgate derivative.

Liverpool City Council who are overseeing the work have estimated that the collection of mammoth molars will be sufficient to recreate three quarters of a full scale Stonehenge replica.

Officials are hopeful that the other 25% will arrive from the Ken Dodd estate in the not too distant future.

Comments Off on Cilla’s teeth to be made into Liverpool Stonehenge replica.