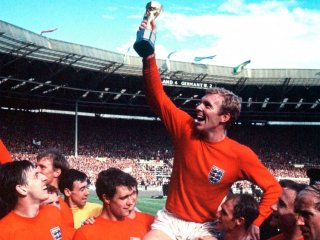 Amendments to the UK’s Hate Crime and Terrorism laws mean any mention of the 1966 World Cup will be illegal after 31st December 2016.

“The number of survivors from English football’s solitary success is dwindling and the rest of us are sick to the back teeth of it all.” said whoever is now the Minister of Culture Media and Sports” In fact, we actually hate it, which is how we’re able to ban it under Hate Crime law.”

” This weekend’s anniversary will be awful, with Bobby Moore shirts up to your arm pits and endless re-runs of the final. Like watching The Sound of Music. On a continuous loop. They think it’s all over? It bloody well will be, after New Year’s eve.”.

The changes have received widespread cross-party support and deep sighs of relief from the public at large and everyone under fifty.

Britain First morons have, unsurprisingly, condemned the move as “another example of galloping muslimification” and “A slap in the face for Winston Churchill.”.

David Baddiel and Frank Skinner regret being unable to release a Three Lions silver anniversary edition in 2021. Instead, they plan to write a new song for 2026, marking the thirty years of hurt caused by their first effort.