No to yes in French and German: Ukip medium demands English name for ouija boards 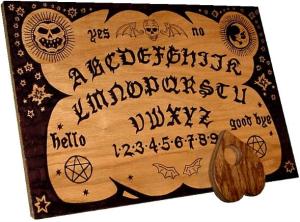 Is there anybody there? No, it works due to the ideomotor effect.

Local medium and Ukip member, Aileen Kinsman, is calling for her party to spearhead a campaign to get ouija boards renamed so as not to put “decent English souls” off from making contact.

“It’s unacceptable for me to have to converse with those who’ve crossed over using equipment named in French and German,” she said. “They should be called YesAbsolutely boards which everyone can understand in an instant and not by a foreign title. I’m a psychic medium, for heaven’s sake, I shouldn’t have to deal with made-up nonsense.”

While Nigel Farage has yet to respond to her letters Mrs Kinsman knows that he will. “Oh yes, I’ll get a lovely reply next Wednesday according to my spirit guide, Enoch. I feel very at home with Ukip,” she said. “After all they can’t produce a single verifiable fact to support what they claim is true either.”

Comments Off on No to yes in French and German: Ukip medium demands English name for ouija boards