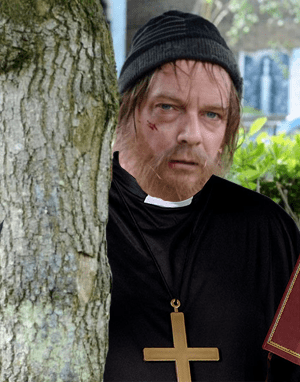 ‘White Neck’ can also lick his own gentiles.

A number of late-night dog walkers have been blessed against their will, by the notorious Feral Vicar of Harold.

Known to locals simply as ‘White Neck’, but probably Nigel Rollins who went missing in 1987, the vicar has left a reddy trail of cheap wine across the playground, particularly on and around the swings.

White Neck was raised by a pack of fallow Rabbis as a child, who found him abandoned after a kite crash in the municipal gardens.

Occasional evening sightings of a ringleted boy skulking near the petting zoo coincided with saliva-coated piglets being found in the morning. But they were never bitten: White Neck respected his mentors and lived by their code.

As he grew stronger, White Neck slowly learned how to ignore his elders. Until one day, he left the pack to establish his own parish.

Space was limited, so he set up near the bins.

“He’s a flipping nuisance if you ask me”, said Howard Stepham, a troubled owner of a pestered dachshund. “If I stop for a ciggy, he tells me I can’t smoke in his ‘church’. And I’m pretty sure a proper font wouldn’t have ducks in it.”

PC Flegg has vowed to capture the vicar, and release him in a sanctuary. “The Over the Hill retirement home would be ideal”, she suggested.

“A lot of them are quite old, so they’re probably hedging their bets. And they’re less likely to notice that he marks his flock with his own piss.”

Comments Off on Dog walkers harassed by feral vicar