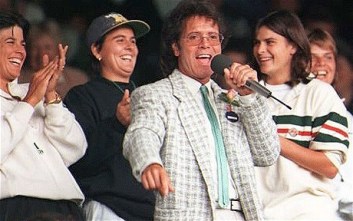 It hasn’t happened since July 1996 however latest research shows that people’s biggest Wimbledon worry is still the threat of Cliff Richard bursting into song.

“I know there’s heightened security around for other reasons,” a denizen of Murray Mound who gave his name only as Yoda told us, “but for most of us the greatest concern is the weather. Every time there’s a cloud in the sky I feel my stomach tighten. Cloud leads to rain, rain leads to Cliff, Cliff leads to suffering.”

Despite pleas from the general public garish jackets and handheld microphones are not on the list of prohibited items at the All England Club. And though Centre Court has undergone extensive modernisation in recent years the Royal Box, or Cliff Zone as it is known, is worryingly still ejector seat free.