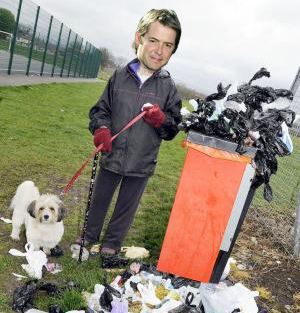 “Pardon my French, but Cameron is so tight that if you stuck a lump of coal up his ass, in two weeks you’d have a diamond.”

Notorious skiver Ferris Bueller has spoken of his truancy regrets, now that he’s trapped in a dead-end job in Harold.

Despite a privileged upbringing and an above-average IQ, Bueller preferred to spend his schooldays ruining Italian cars and singing Liverpudlian songs in the traffic.

When his parents moved to England, Bueller’s ‘illness’ was cured by the NHS, but he continued to fake his way through the education system.

“And now I’m doomed to spend every day emptying bins of neatly-tied warm bags of leavings”, lamented Bueller. “I still sing ‘twist and shout’, but people rarely join in.”

“This might look like it’s my fault, but there’s a rich idiot I can point the finger at”, revealed Bueller. “Some people are born to take the blame.”

“And just like at high school, he happens to be called Cameron.”