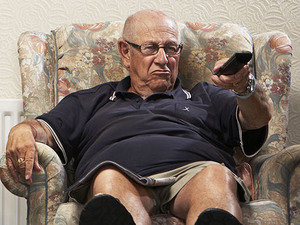 Leon paused the bit where Leon was on, to try and catch a glimpse of his cock.

Four of the stars are now so shallow, their opinions hardly matter at all. “They’re in an observation ward”, explained Channel 4 spokesman Harry Tubes. “The doctor says they’re not serious, but still very watchable.”

Reverend Kate Bottley in her trademark onesie polo neck was shown Kate Bottley commenting on Kate Bottley, and no longer believes she is real. Shortly after, Alan Bennett clones Giles and Mary rewound the bit where they were on and disappeared up their own arseholes.

Known by some as the ‘Posh Couple’, Steph and Dom Posh were initially doing well after finding their performance quite fascinating.

Unfortunately they’re now both awaiting a liver transplant, after playing a drinking game where they attempted to keep up with themselves.

The show has been cancelled this week and will be replaced with an hour-long show of a canary staring at itself in a mirror.

“It should be safe for viewers, but if the canary dies, you should get out”, said Tubes. “It means you’ve used up all the oxygen in the lounge.”