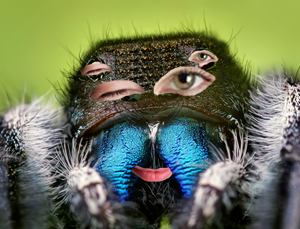 Spider ‘gave him the eyes’.

A local deviant has claimed that a spider he found in his kitchen was so sexy, it gave him a 4-hour erection.

Hagrid Evans told us that the arachnid has evolved over thousands of years specifically to ‘give him the horn’, and being a spider, instinctively went for his fly.

“I’ve always been a leg man, and this beauty had eight”, leered Evans. “I could tell I was in love, at least an incy wincy bit.”

The spider seduced Evans, slowly teasing silk from her bottom with her feet. “One thing led to another, and before long, we were sharing my bed”, said the weirdo. “That’s when she tied me up, and bit me in the face.”

Evans has now left the local hospital, the worst of his necrosis patched up with play-dough. He claims he’s learned his lesson, and hopes to meet a more vanilla spider.

“I’ve met a nice one on the web, she’s shy and plays hard to get”, he revealed. “But it’s just an act: she’s asked me to bring an upturned glass and a bit of paper.”

Filed under Around Harold, Nature, Sex