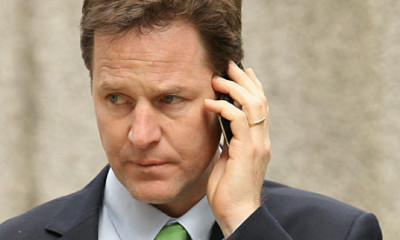 Not to be outdone twice in a week, Downing Street has confirmed that Prime Minister David Cameron hung up on yet another hoax caller claiming to be someone important while also claiming to be Nick Clegg.

“It was an obvious hoax, and they’ll have to do better than using the words Clegg and important in the same sentence if they want to catch me out,” a gleeful Cameron said.

“I told the caller that I didn’t believe them and they started sobbing in an almost uncontrollable fashion, muttering something about nobody loving them. The follow up call from ‘the deputy prime minister’s office’ to say how upset Clegg was was equally lame. Every knows that we didn’t give him an office, it was just the conservatory with a 3 feet by 3 feet section curtained off.”

A spokesman for the deputy PM has confirmed the story but insisted the calls were genuine. “The only difference between this call and any others over the last four and a half years is that Nick had found out the real number for Mr Cameron, and not the pretend one he was given when he signed up to the coalition.

“He has also asked me to remind everyone that he is important and without him making difficult decisions, and fighting the difficult fights, the Tories would have set tuition fees at £2m a term, made it legal to eat old people, and invaded the moon to frack for cheese.”

Despite the outlandish claims about how Nick Clegg saved this country made by his spokesman, everyone believed he was genuine right up until he also claimed Mr Clegg truly believed the Lib Dems were still a force in British politics, at which point it was assumed it was another hoax.